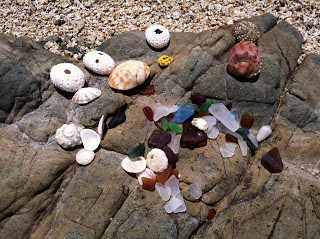 A few weeks ago, as I strolled along the beach in CT with my father, we encountered a young girl handing out flyers for her lemonade stand down the street. I read the sheet and was immediately outraged. Her “Lemonade Stand” would be open that day from 1-3- or maybe longer.
“Maybe longer??” I shouted into the wind. “Where has the work ethic gone?” I spewed in disgust to my father. We joked about this for a few paces more. Would she be donating the money to a local charity I hope- we teased- due to her swanky address.
But seriously- my childhood enterprise was way better than this lazy little sprite, with her fluctuating hours. It all began with two scrappy girls and an idea. An idea that we could pick up shells and other treasures from the beach and the world would buy them from us at our home storefront. We called it The Shell Stand and after a few successful years we expanded into the restaurant world with the launch of the ME muffin café.
The  premise behind the ME (aptly named after Marissa and Emily) Muffin Café is that we would scrape together $1 a week essentially to purchase a box of Jiffy Muffin Mix, which my mom would then bake for us, and then we would resell them to her and my business associate’s parents on a daily basis.  We also sold them coffee they made. We worked long hard hours, for less than minimum wage and I think it truly was one of the pivotal experiences in my life that shaped me into the person I am today.
Is this drive and determination lost on the current generation? Perhaps I should start a mentoring program… or we may all be at a loss for lemonade.